Species of Jellyfish in the US

Encountering a jellyfish in the open ocean is one of the few things besides rip currents that can ignite fear in the hearts of even the best swimmers. But just how prevalent are jellyfish? And how many species are there?

There are actually several hundred species of jellyfish in the oceans, but there is no need to panic as only a few of these species are poisonous. The most famous poisonous “jellyfish”, the Portuguese Man-O-War, isn’t even actually a jellyfish!

Read on to learn more about which species of jellyfish live in the United States and where you should be worried about encountering them. 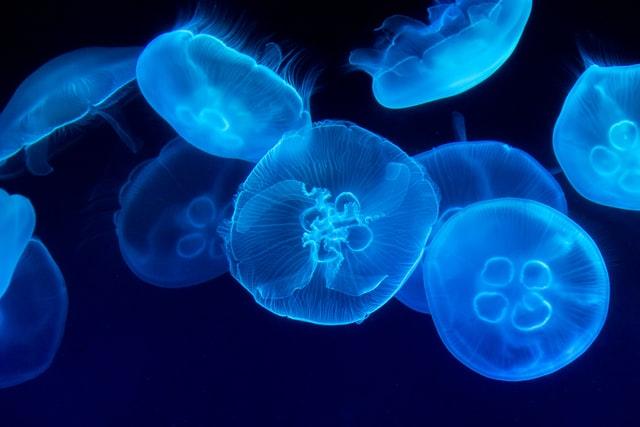 Even though you’ve likely heard the term jellyfish since you were a child, that doesn’t mean you know what these creatures actually are. Jellyfish are cnidarians, meaning they lack a backbone and that they are not fish.

There are a couple of different classifications of jellyfish, mainly based on their shape. True jellyfish are round in shape with tentacles that attach to their sac-like bodies. There are many freshwater jellyfish as well as saltwater jellyfish, and they are found in every part of the world regardless of ocean temperature.

Of course, the tentacles are the most famous part of the jellyfish because they include cells that can sting humans. Although this may sound scary, you will not feel the sting of a majority of types of jellyfish, and almost all of the types of jellyfish are not poisonous.

Jellyfish have the ability to sting in order to better hunt their prey. Jellyfish eat a variety of foods depending on the type, some eating plankton, and others eating small fish.

Jellyfish can be small, or large, the largest known jellyfish having reached a diameter of more than 6 feet across with tentacles that go on for 100 feet (imagine meeting this jellyfish in the ocean! A gathering of jellyfish is called a smack or bloom.

When is Jellyfish Season?

The time of year when jellyfish gather to reproduce will widely depend on where you live. Jellyfish in Massachusetts for example can typically be found year round. Lion’s mane and cannonball jellyfish in the winter, followed by sea nettles and moon jellies in the summer.

In the Puget Sound, off the coast of Oregon, it is more common to just see jellyfish in the summer season, and typically they are moon jellies. Jellyfish in Florida are more subtropical and tend to stick around year round. Same with Hawaii, where box jellyfish show up after every full moon for their breeding cycle. Below is a chart that shows some of the common times of year you can expect to see jellyfish in each state.

If you are headed somewhere international that isn’t mentioned on this list, ensure you take a look at the jellyfish seasons before you go. Some places can have large congregations of jellyfish that can make it impossible to enjoy a snorkeling or swimming experience. 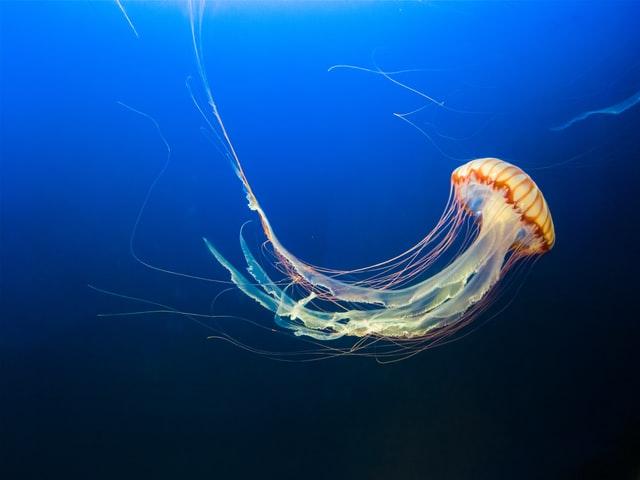 What Are the Most Dangerous Types of Jellyfish?

While most jellyfish are harmless there are a few types of jellyfish you need to be careful and aware of when you are swimming in the ocean.

This list may seem short, but box jellyfish is actually a category with about 50 types of jellyfish in it. Still, out of the hundreds of jellyfish types in the world, only about 60 breeds will kill you. If you do suspect you have been stung by one of these jellyfish, notify emergency services immediately.

What is a Portuguese Man O’War?

Rather, it is a collection of organisms who live and work together to survive. They are named after an old-time warship that they slightly resemble.

Although they aren’t the most dangerous jellyfish in the ocean, Portuguese Man O’Wars can sting for a long time after they are dead, and there are many stories of individuals dying from a sting of a dead one. It’s best to never touch a jellyfish whether alive or dead.

How to Avoid a Jellyfish Encounter

The best way to avoid being stung by a jellyfish is to avoid encountering them entirely. While jellyfish aren’t out to get you, they will likely sting you when they come into contact. They don’t do this to be mean, this is an automatic reaction on their end.

Many beaches will fly a particular flag color when there is a high concentration of jellyfish in the water. Do not enter the water if a lifeguard has warned you against it.

2. Be Aware While Swimming

As you swim, keep an eye on your surroundings. Jellyfish usually travel in groups of more than one, so if you see one, leave the area immediately.

Many types of jellyfish cannot sting through clothing. Cover your skin as you swim. A t-shirt can work for more casual occasions, but if you are a serious open water swimmer you should invest in a wetsuit.

Many deaths from jellyfish occur because someone is stung and doesn’t have anyone around to help them get out of the water. Always swim with a buddy and keep an eye on each other for signs that they are in distress and may need help.

What to Do When You’ve Been Stung by a Jellyfish

It’s possible that even the most cautious swimmers will eventually come into contact with a jellyfish. When that happens, follow these steps.

If the person who is stung can’t breathe properly, or move one of their limbs, it could be an allergic reaction or a deadly sting. Contact local emergency services immediately.

If you have access to Benadryl, or an epi-pen, this can help subdue an allergic reaction to a jellyfish sting.

Remove any remaining tentacles from the skin. Do not use your bare hands. Use tweezers or a glove.

Vinegar helps to neutralize the stinging cells left on the skin. You can just use regular household vinegar. Do not pee on a jellyfish sting, this is a myth.

If your sting is not bad enough to call emergency services, you can soak your jellyfish sting in hot water for an hour to help subdue the pain. You can also apply pain cream until the site is no longer painful.

When in doubt, call emergency services or a qualified medical professional for advice.

Do All Jellyfish Sting?

While all jellyfish do sting in order to hunt their prey, most of the time humans can’t even feel the sting of a jellyfish. Even fewer stings actually carry poison.

Do You Pee on a Jellyfish Sting?

Do not pee on a jellyfish sting. This is a myth and in most cases, it will only hurt the sting more rather than helping it heal.

Are there Jellyfish in Texas?

There are many different types of jellyfish in Texas, some of which can be deadly and should be avoided.

Are there Jellyfish in California?

There are many types of jellyfish in California and with each year the number of jellyfish in pacific waters increases. Many suggest this is due to climate change which is making the water warmer which the jellyfish prefer.

What is the Deadliest Jellyfish?

Despite common perceptions, the Portuguese Man O’War is not the most deadly of jellyfish. Rather it is the Irukandji Jellyfish that can kill a human with just a couple of stings. These jellyfish are also really tiny and difficult, if not impossible, to avoid.